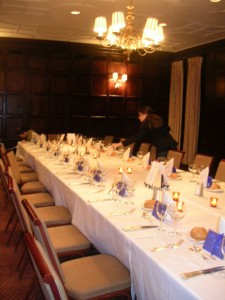 My 23rd birthday was my first birthday away from home… I really had no idea how I was going to spend it. It was to fall on a Friday – Veteran’s Day…an American holiday (unfortunately, or fortunately – depending on how you look at it – I had work). I was planning on going to Virginia for my birthday and spend it with family, but I could not take off from work that day and had to push back my trip for Saturday… and it was a good thing I did… because it was an awesome birthday, thanks to my wonderful friends here in NYC.

Celebration started the evening before my birthday at the Harvard Club. Hahaha! Yes, friends – I had dinner at the Harvard Club here in Manhattan. Crazy. It was pretty neat… red carpets, dead animal heads and antlers on the walls… Harvard Alumnae walking around, smoking their pipes, reading their newspapers… A very sophisticated atmosphere… and I had no idea what I was doing there. Several of the staff had dinner with some friends of the Alliance – including George Weigel. Wahoo. We gave copies of his latest book (which he signed)… and unfortunately, I did not get one. Boob. But ‘tis okay. I’ll live.

It was an interesting dinner really… It was a Weigel event… and most of the guests were wealthy Catholic New Yorkers… quite conservative, seemingly very devout and all. It was a relatively small gathering of about 20 people around a long table in one of the private function halls. There was a beautiful fireplace at the end of one side of the room, and a little podium for the speaker on the other side. There George Weigel started his little speech… but he did not stop there. As the food started coming in, he decided it was time for him to eat as well… but the questions from the guests did not stop coming in either. Through bites of his dinner, Mr. Weigel would share bits of his immense intellect with the crowd.

I guess it is interesting to note that I was the only Asian in that room. Probably one of the only ones in the building – I don’t know. The discussion in the table was not exactly one of the best ones to be in either (as non-white / sort of non-American person). As much as I advocate patriotism and love for country – this was way too America- is- the- greatest- country- in- the- world for me. There was a lot of Europe bashing (Poor Phil – the only European in the room)… and they hardly talked about our part of the world. I don’t know which was better, being bashed or not being acknowledged at all. Not that it really matters at this point.

But of course, Phil and I were on our best behavior. We had to be our naturally charming selves and entertain our potential donors. Hay.

After dinner, Gabie, Phil and I taxied home – THANK GOD! Because I was in killer heels and I don’t know what I would have done if we still had to walk to the subway and commute home. Ack. And it was so cold (It is much colder now though). 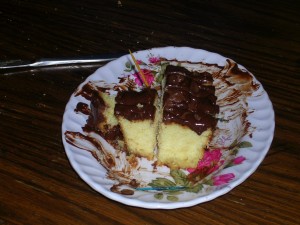 Back at the Pogue – waiting for midnight. Meghan brings out little party hats, we uncork a couple of bottles of wine (from our little dinner – Yey for leftover wine!) and Anne Marie makes a little birthday cake – which was really week-old sponge cake, smothered in Nutella (which was Ivana’s – who was out of town… and probably has no idea that we took it)… and because we had no candles – I blew out toothpicks. Bwaha. Riot. The irony of our work… Dinner at the Harvard Club and after dinner drinks and cake at the Pogue.

The next day, my officemates tried to surprise me at the office… So sweet. With pastries and carrot cake and balloons and candles… Wehe. But I got to the office earlier than all of them. So I helped them blow the balloons instead. Bwahahahaha! It was great. We spent the morning eating and laughing – trying to do work, but not really getting anything accomplished. They we left early to go ice skating!!! Wahoo!!! My second time to ice skate.. and I did not fall. 🙂 I just went very slowly. 😛

That night, we were supposed to watch Rent (we got free movie tickets)… but were too late and lost our seats…so we ate at Applebee’s instead. Bwaha. Ate and drank and laughed. Hay. Good times. 🙂

We went back to the Pogue happy and full… ready to party… which we did. With nobody at home but us, we turned off the lights, turned up the music and made the kitchen into a club… Rina taught Andreea how to get her freak on. BWAHAHAHAHA. So my birthday ended with a bunch of crazy girls dancing to club music, with the microwave door open (for light)… and our only boy tucked away in the sala, reading his book – too scared to come out and play. Aww.. Poor thing.

Hay. Twas a great birthday. I never woulda thought I would be spending my birthday that way. Ever. 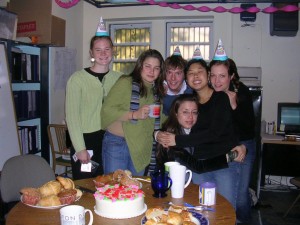